May 1st, 2014 marked Aaron Hernandez’s first day in prison, and things didn’t go so well for the former Patriots tight end.  Sources say Hernandez fought, served as a lookout, got a neck tattoo, and stole an inmate’s calling card, and this was all in his first day.  He had a total of 78 disciplinary offenses in his two years at the Souza-Baranowski Correctional Center.  To say that Hernandez was troubled would be an understatement.

Aaron Michael Hernandez was born on November 6, 1989, in Bristol, Connecticut. In his early years, his mother, Terri Hernandez, had twice turned to the courts for bankruptcy protection. Soon after, when Aaron was around the age of 12, his mother began taking bets for an illegal gambling organization, and the police would later seize reams of evidence from the home. On top of all this, his mother’s second marriage to a violent ex-convict, who had previously wed his cousin, caused even more hardship for the family. It is not known how much Hernandez knew about his mother’s actions, but it is clear that his family life was very troubled. Despite this, Aaron’s high school football career showed he was headed for success, earning his team the championship title in 2006. Unfortunately, his father died after complications from a hernia surgery during Aaron’s senior year. It has been said by many that Aaron became more rebellious after his father’s death.

Hernandez then went on to attend the University of Florida.  After winning the 2010 Sugar Bowl for Florida, Hernandez announced he would forgo his senior year and instead enter the NFL draft.  He was drafted by the New England Patriots in the fourth round.  In 2012, Hernandez signed a five year, forty million dollar contract with the patriots.

In 2013, the trouble began. In February, 2013, one of Hernandez’s associates filed a lawsuit alleging that Hernandez shot him in the face after an argument at a nightclub. Four months later, the body of Odin Lloyd was found about a mile from Hernandez’s mansion. Hernandez was arrested for Lloyd’s murder soon after. It is known by most now that Hernandez was recently found guilty of murdering Odin Lloyd and was sentenced to life in prison. On top of this, Hernandez was also believed to be involved in many other violent events and even the murder of two other men. Not long after he received this life sentence, Hernandez was found hanging by a bed sheet in his cell. He was discovered late into the night on April 19th, 2017, and he was pronounced dead not long after. It is believed by many that Hernandez committed suicide so that his daughter will receive the money from his NFL pension.

Much of Aaron Hernandez’s death still remains in question by many. His motives can never be fully known and are still being investigated. Many people have their own theories about Hernandez and whether or not he received the punishment he deserved. We decided to talk to a few students at the school and find out their opinions. We started off by asking students if they believe in the death penalty, and if so, whether they think Hernandez should have received it. One student answered, “I do think some people are too messed up to fix and deserve the death penalty, but Aaron Hernandez did not. He was involved in a lot of gang violence.” Another student said she didn’t believe in the death penalty, but that Hernandez did “deserve life in prison because that is worse than dying.” We were also curious to see what the students thought about Hernandez’s motives for killing himself. Both the students we interviewed agreed that his main motive must’ve been so his daughter could get his pension.

This case has brought a lot of attention to the issue of suicide, as well as gang violence. Although we live in a rather quiet town, these issues are becoming more and more common in our world today. It is important that we are aware of these problems so we can try to help those who are faced with difficult life decisions. 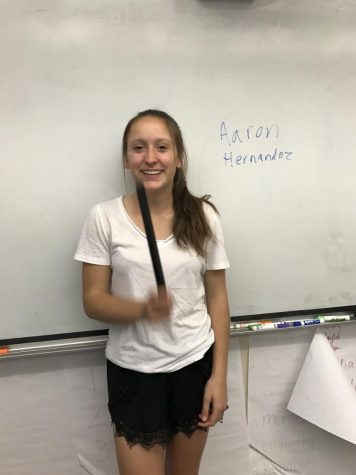