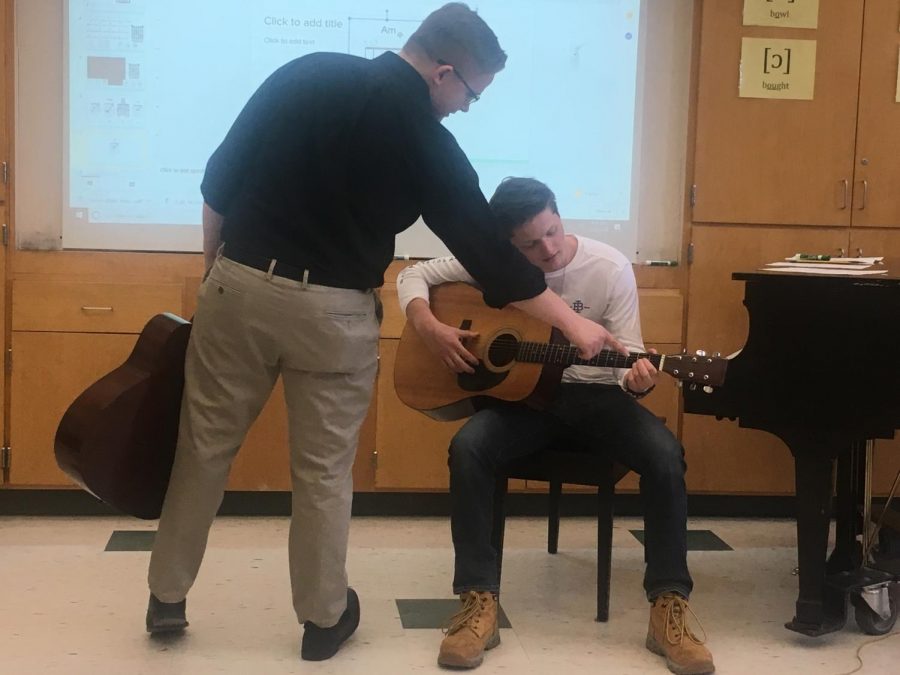 Student teaching is the final step towards attaining a degree in education. A practicum experience is an essential learning component for education majors that allows student instructors to get a true understanding of the classroom, the students, and the potential career ahead of them. To gain the necessary experience for their college or graduate program, student teachers assist in a classroom under the supervision of a more skilled teacher who evaluates and provides feedback to their mentee. Because student teachers are in college, their younger age often allows them to connect with students in a way that is different compared to what is possible with regular teachers. The connection formed can be beneficial to students and can improve their interest in learning.

Michael Webb is a senior at Gordon College who is currently pursuing his bachelor’s in music education. One thing Gordon College says is that  “Today’s students are tomorrow’s teachers and leaders. Learn how to help them succeed at every age and learning level.” During his final semester at Gordon, Mr. Webb is spending his time in classrooms working with students. He is currently teaching students at Ipswich High School under the supervision of choral director Abigail Frost. He will spend the second half of his semester working with the music teacher at Winthrop Elementary School, Mrs. Fab. This plan allows Mr. Webb to achieve a more complete understanding of what it is like to work in a classroom with students of all ages. At the high school, he is assisting Mrs. Frost with directing the choral ensembles and he is also teaching an introductory guitar course.

Initially, Mr. Webb did not enter college with plans to teach. He became interested in music at a young age when his parents enrolled him in guitar lessons for his eleventh birthday. When he first started playing, Michael was interested in classic eighties as well as nineties rock and metal. Joe Satriani’s iconic Surfing with the Alien was a favorite of his. As Mr. Webb continued to play guitar, he was encouraged to branch out. Mr. Webb said that “Towards the end of high school, I got more into jazz stuff.” As he entered college, Mr. Webb was more focused on the musical aspect of music education. He was told that being able to teach was a critical component of becoming a musician, but he was definitely a musician first and a teacher second. During his sophomore year at Gordon, a transition took place and Mr. Webb found his true passion for teaching. He decided that teaching would be his first priority.

Working with and observing Mrs. Frost at Ipswich High School has influenced and solidified Mr. Webb’s desire to become a teacher. He noticed and appreciated “how much she cares” and “how she is very passionate in teaching.” Mr. Webb even claimed, “That’s how I want to be as a teacher.” He wants to care about teaching and his students in a similar way and said that he views “students as people, not just as musical instruments to make a sound.” While he has certainly learned a lot about teaching from Mrs. Frost, the learning process has been reciprocal. Mr. Webb has exposed Mrs. Frost to new ideas that have allowed her to view the classroom in a new way.

Over the course of the third quarter, Mrs. Frost has had a long time to observe Mr. Webb interact with students and considers him as “cool, groovy, and easy to teach.” Mrs. Frost emphasized that “Music is the water and he (Mr. Webb) will help you swim.” In choral ensembles, he provides Mrs. Frost with additional assistance in class. She mentioned how Mr. Webb is helpful because he can take groups of students who are struggling and help get them on track. When Mr. Webb teaches in class he demonstrates solutions to problems. He encourages students to make interdisciplinary connections. He also likes to pull kids with more experience to assist students who may need extra help. This allows students to feel like they are part of the class and included in the lesson.

According to the American Psychological Association, “Teachers who experience close relationships with students reported that their students were less likely to avoid school, appeared more self-directed, more cooperative and more engaged in learning.” Students who we interviewed expressed that they also felt this way. To get the full picture of Mr. Webb, we asked students who want to pursue music in college to evaluate his teaching. Charlize Vermaak is a senior who is passionate about music and is involved in multiple select ensembles. She mentioned that “I have grown to understand his gestures more as he realizes what he should do to make it clear as possible!” Charlize can acknowledge the growth between the first day he conducted until the last and she hopes to see something similar in herself.

When asked what qualities are exhibited by an ideal student teacher, Mrs. Frost replied, “He (Mr. Webb) is ideal.” When student teaching is done as well as it is done by Mr. Webb, everyone benefits. The student teacher gains the necessary in-classroom experience and also gets a feel for the career that lies ahead of them. The more experienced teacher gets a helping hand as well as a new perspective on instructing. The students get to see a new face in the classroom that also complements the regular teaching style they are accustomed to. This powerful dynamic promotes critical thinking in the classroom and a desire to learn. Mr. Webb concluded his interview by saying that “Any good teacher is also a student. You find yourself growing tremendously in the process.”