Four years ago, Ipswich High School was blessed to welcome a new teacher into the school district, Monsieur Craven.  Since his arrival, at the beginning of the 2015-16 school year, Monsieur has been positively affecting the community with his positive attitude, his energy, and his commitment to his career. For example, he has spearheaded the Ipswich High School French exchange program along with multiple other language initiatives around the school. His close ties with the South of France has allowed us to have a fantastic and vibrant French learning experience throughout high school.

Monsieur currently resides in Salem, Massachusetts but has continuously assisted in the growth of Ipswich in hopes of establishing a well-rounded community for his students. Not only has he organized an exchange program with a country on the other side of the Atlantic ocean, but he has created a lot of exposure for the language program at Ipswich High School, by collaborating with local businesses and institutions to help raise money and support to keep the French Exchange Program running.

As a Massachusetts native, Monsieur grew up in Milton, Massachusetts, with his Irish family. His father is from Revere, and his Mother is from Mattapan. He went to the Milton public schools and participated in the French immersion program that the school offered, and he hated it. He participated in this program from 1st Grade to 5th Grade. Eventually, he was sent to a summer camp, where he met a few French kids. It was then that he realized that he could use his linguistic skills to communicate with these kids. He became good friends with them and was able to translate for them.

Monsieur said that he never thought he would be a French teacher, but it was just the direction that life took him. A student of his, Eva Capobianco, says, “Monsieur Craven has 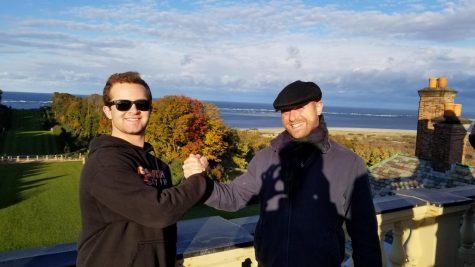 never failed to make the class enjoyable and I am thankful to have been given the opportunity to be in his class.”  He said that although he did not like it at first, he fell in love with the occupation, and it has taken him on countless journeys in his life. The summer camp experience turned his life around in “a complete one-eighty.”

Monsieur Craven traveled to several places after college. He started his post-high school education at Massasoit Community College and enrolled in Spanish classes to gain credits. Afterward,  he decided to go to Clark University for two years but did not enjoy the experience as much as he had expected to, so he moved back to Milton and commuted to UMass Boston to finish his undergraduate education. He then taught around the Cape for a few years and eventually ended up at Ipswich High School teaching French. He recently completed his master’s degree at Gordon College, which he described as consisting of “interesting vibes.”

In the future, he plans to continue teaching and inspiring students to explore the different cultures and languages of the world. He said, “Teaching is something I love to do, and I want to keep doing it as long as I can.” He also wants to keep exposing people to the world and continue his exchange program.  He hopes that is his legacy.

Aside from teaching, Monsieur is always staying active. For example, he played a lot of sports in high school and through college. He said he is suffering from a “withdrawal from sports since college.” Although to stay active, Monsieur runs six miles every weekend. Furthermore, he enjoys competing in races such as local half marathons, 5ks, and other distance races. He says he always tries to do some sort of “physical adventure” on the weekend. Another weekend tradition that Monsieur takes part in is that every Saturday afternoon from 3pm-6pm he lays down and listens to 89.7 FM which is the Irish radio station. He described the DJ’s voice as being “very relaxing” and “enjoyable to listen to.” It allows him to take naps, as it is very relaxing.

Monsieur Craven loves to stay busy. He enjoys going to trivia night in Salem with his buddies Jimmy E. and Billy F. from the IHS Tech Department. He also mentioned that he enjoys helping out at a homeless shelter during their breakfasts times.

It is rare that a person like Monsieur Craven arrives and enriches a community as he has done. “It is hard to find a teacher who is so committed to their job while still making the class an influential experience for students,” said student, Chris Folan. We are positive that the exchange is something that will live on, as many of us always keep in touch with our exchange students, and many IHS students plan to visit France soon.