Is an F worth it?

Is the attendance policy helping or hurting Ipswich High School? Studies done on attendance have proven that attendance helps improve academic success. It is said that the building block that must be in place to meet student achievement and high school graduation goals is attendance. At Ipswich, the policy was put in place to help improve our ranking and to help students academically succeed. After interviewing a few students, what kept coming up was this “I think it is a good idea in theory but isn’t a perfect method that fits everyone. I understand where the idea comes from. We need more attendance and I think it has improved our school’s attendance. But, I think that certain things should not count as an absence and go against you.” All the students I interviewed believed that it could potentially help to benefit our school with some adjustments.

The policy was created so that students would show up to school and to fix the high percentage of absences on our school’s accountability report. Also stated by Mr. Mitchell “Students will fall behind when they are out, and it is obviously impossible to make up for missed learning experiences in classes whether assignments are posted in google classroom or not.” This has been proven in studies that attendance rates improve students academic prospects and chances for graduating. “This year our rate of chronic absenteeism is down about 25%, and it must be due in part to the new policy.” Although this has improved the rate of absences at Ipswich High there are still a few revisions Mr. Mitchell may make to the policy such as “ I have been thinking about is having multiple absences for the same illness counting as one absence if there’s a doctor’s note that verifies that the student was out those consecutive days for the same illness.” This I believe could help the students who are afraid of being out sick and taking sick days.

Research has shown that students who are absent within the first month of school likely can predict poor attendance throughout the school year. Statistics show half the students who miss 2-4 days in September go on to miss nearly a month of school. This shows that for students who are “chronically” absent something more than just a policy needs to put in place. They need to be provided with mentors or if their absences are due to illness another method should be used.

Health is another issue that causes absences. Some students come to school sick and contagious which makes it easier for others to get sick. In an interview, it was brought up that students sometimes come to school out of fear of being absent because all doctors are different. Some doctors will give you a note for school if all you do is call them, others make you come into the office. This makes it difficult when students have a common cold and don’t need to visit the doctor’s office. Also, some people may not be able to afford the copay or might even not be able to get an appointment. The policy is great for some students while others have to pay for it.

During an interview, a student explained the policy could potentially hurt students academically. They exclaimed that “certain things should not count as an absence and go against you. For example, doctor’s appointments or anything that is a reasonable excuse should not be held against someone. The only thing that should count against the 3 or 4 absences should be when they are unexcused. I don’t think it is fair to give a well rounded good student, who gets good grades, a failing grade because they missed school that was excused. It should be on an individual student basis.” The attendance policy is both helping and hurting students at Ipswich High School. What would you do to revise it? 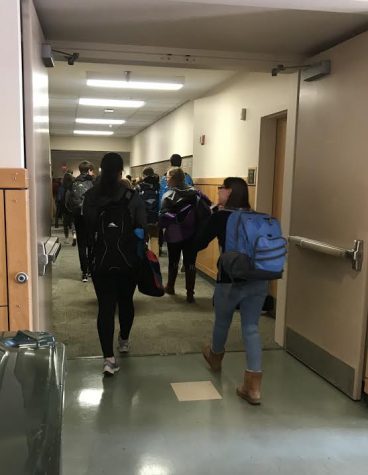