Should NCAA Athletes Be Allowed to Profit from Their Own Name and Image?

Should student-athletes benefit from their likeness and image? This is a question that has been asked at the top level of sports many times over the last couple of years. This decision has been debated for years. College student-athletes bring in billions of dollars a year for their school and they get none of that money for themselves.

Many student-athletes are broke and struggling. The busy schedule of being a student-athlete leaves them almost no time to work, especially at the  Division 1 level. Being a Division 1 student-athlete you do get a lot of benefits, like free gear, free food, world-class facilities, and extra academic help whenever needed.

I don’t think student-athletes should be paid a salary from the schools they attend, but I do think the NCAA should allow student-athletes to benefit from their image and name. I think letting the kids benefit from all the millions of dollars that they bring in for the schools is fair. My mother stated “How can someone be bringing in millions of dollars for your program and they’re struggling to live, will they get asked to go 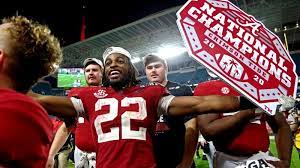 to classes, workouts, and practices”. All college student-athletes should be able to benefit from their likeness, but it will depend on the certain athlete and the school they attend and play for.

Athletes at bigger schools are more nationally known, so should they make more money. For example, if a Division 1

Scholarship athlete has a popular Tik Tok or youtube channel they can’t make any money from it and if they do, their scholarship is taken away. I don’t think student-athletes should be punished for trying to make extra money.

One thing I don’t agree with and we have to change is the mindset of once you sign your NLI (National Letter of Intent), the schools own you. I know there are certain rules the athletes have to follow, but there shouldn’t be the mentality that the school owns you. Many people say it’s a form of “modern day slavery”. For example, a football player at Michigan University would benefit more than a football player at Framingham State University. This is nothing against the athlete. Michigan football just brings in more money, so there is more to give out. This may not be fair to some athletes, but not every athlete can play at the next level or even at a big university.

Many say “allowing athletes to benefit from their likeness would make athletes want to play at the bigger schools and forget the smaller schools”. Many student-athletes dream about playing at the big colleges and universities but not every athlete can so to me that is not a worry. Many high school athletes cherish the opportunity to keep playing after high school so they’re going to pick a school they feel they will play at, not just sit on the bench.

Many states are in talks about passing a bill that could have athletes benefit from their name, image, and likeness. Some states like California and Texas have approved or are about to approve this bill. By law, college athletes can hire an agent to represent them. Many coaches, athletic directors, and other people don’t like it. “Some other lawmakers begrudgingly supported the bill, claiming the change would negatively impact college athletics which should be played ‘for the love of the game’ rather than compensation which some feared would have negative consequences on collegiate athletics” (Kate McGee from the Texas Tribune)